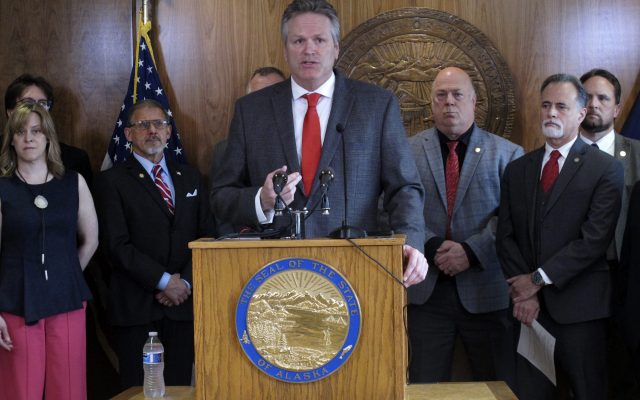 JUNEAU, Alaska (AP) — Alaska Gov. Mike Dunleavy was sworn in for a second term on Monday, saying his goal is to “work with everybody to create an Alaska for the next 50 years.”

The Republican last month became the first Alaska governor since Democrat Tony Knowles in 1998 to win back-to-back terms. Dunleavy won the ranked vote governor’s election with more than 50% of first-choice votes. His challengers were Democrat Les Gara, a former state lawmaker; independent former Gov. Bill Walker; and Republican Charlie Pierce, a former borough mayor who was sued in October by a woman who said he sexually harassed her.

The swearing-in ceremony for Dunleavy and Lt. Gov. Nancy Dahlstrom was held at the Alaska Airlines Center in Anchorage. Kevin Meyer, a Republican, was lieutenant governor during Dunleavy’s first term but did not run this year. Dahlstrom, a former state lawmaker, oversaw the state corrections system during most of Dunleavy’s first term, before becoming his running mate earlier this year.

There was much less drama around Monday’s swearing in than there was in 2018, when Dunleavy first took office. Four years ago, he was sworn into office in a school gym in the western city of Kotzebue after poor weather forced a change in plans the morning of the ceremony; he had planned to be sworn in in the tiny community of Noorvik, where his wife, Rose, is from. He went to Noorvik later that day for a celebration.

He also took office in 2018 days after a magnitude 7.1 earthquake rocked Anchorage and parts of south-central Alaska.

“There’s been some moments the past four years that I’m sure that some people were saying to themselves, ‘What’s next? Locusts, volcanoes?’” Dunleavy said, adding later: “With your help over the past four years, we’ve gotten through some difficult times.”

His first term in office was at times tumultuous, marked early on by tensions with lawmakers and a recall effort fueled by public anger over vetoes and proposed budget cuts. Supporters of the recall effort abandoned their push last year, with the gubernatorial election looming.

During his speech Monday, he did not delve into specifics about his agenda for his new term but sounded a positive tone.

“I’m going to work with everybody and anybody. I’ll be working across the aisle with individuals,” Dunleavy said.

He is due to deliver a proposed budget by mid-month. The next legislative session begins in January.

One of the big unresolved issues that will face lawmakers will be how to address the yearly dividend paid to residents from Alaska’s oil-wealth fund, the Alaska Permanent Fund. A longstanding formula for dividends was last used in 2015, and policymakers have not settled on a new one, instead setting the amount each year. That approach has contributed to at-times drawn-out or divisive sessions.

Residents this year received payments of $3,284, a combination of a dividend and one-time energy relief payment that lawmakers approved when oil prices were in the $115-per-barrel range. North Slope oil prices more recently have been under $90 a barrel.

Under the state constitution, a governor’s term begins at noon on the first Monday in December after the election. Jeff Turner, a Dunleavy spokesperson, said scheduling issues prevented Monday’s ceremony from beginning at noon; it started instead at 1 p.m. Turner said the oaths of office were signed around 11:30 a.m.

There was a ceremonial signing of oaths during the event, he said.