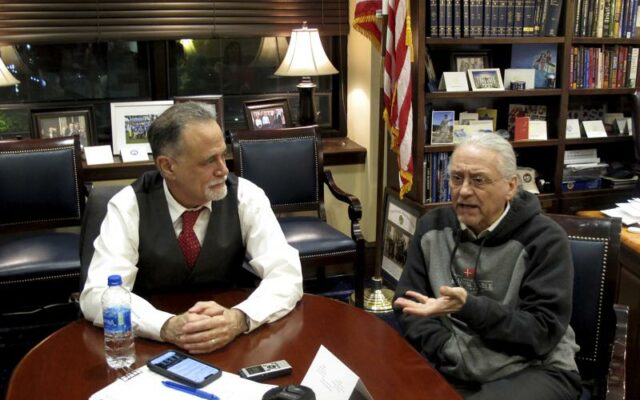 JUNEAU, Alaska (AP) — Ten Alaska state lawmakers do not plan to seek reelection this year, and eight others are running for other offices.

Fifty-nine of the Legislature’s 60 seats are up for election.

Those who do not plan to seek reelection include Republican Senate President Peter Micciche, who previously announced his decision, and Senate Minority Leader Tom Begich.

Begich, an Anchorage Democrat, remains listed as a candidate but told The Associated Press on Thursday he’s “pretty sure” he’ll withdraw next week.

“In my heart and my mind, I’ve moved away from the job,” Begich said.

He said he spoke with Löki G. Tobin, who has been an aide to him, before Wednesday’s filing deadline and told her he may not run again. She filed to run for the seat, for which independent Heather Herndon also has filed.

Begich said he felt “a sense of relief” in indicating he would not run.

Tobin, a Democrat, said she was “excited and caught off guard” when Begich called her. She said she’s passionate about her community and ready for the opportunity.

Several of the incumbents who opted against seeking reelection cited family considerations, including Micciche and Republican Rep. Sara Rasmussen. Rasmussen said her young family previously relocated to Juneau from their home in Anchorage to be with her during session. But she said her son started kindergarten this year so her family stayed in Anchorage and she commuted back and forth.

“I was really on the fence on everything, kind of until the end of session, and I felt like the best thing to do was just to prioritize my family at that point,” she said.

This year’s regular session ended within the 121-day constitutional meeting limit but prior years have been grueling, marked in some cases by divisive special sessions. There have been 15 special sessions since 2015, four of them last year.

Democratic state Rep. Adam Wool of Fairbanks and Republican state Sen. Josh Revak of Anchorage are among those running for a different office. Both are running for U.S. House. Republican Rep. Christopher Kurka of Wasilla is running for governor. Republican Gov. Mike Dunleavy is seeking reelection.

The primary is Aug. 16; the withdrawal deadline is June 25.

It was just last week that the political boundaries for this year’s elections were set following rounds of litigation over the redistricting process. This also will be the first state elections cycle following a split federal appeals court panel decision last year that struck down several campaign contribution caps.

The Alaska Public Offices Commission has said there are no longer limits on what an individual can give to candidates or to non-party groups.

This year also brings changes to the elections process. Under an initiative passed in 2020, there are no longer party primaries. The four candidates who win the most votes in their primary, regardless of party affiliation, will advance to the general election, in which ranked choice voting will be used.

Jason Grenn, executive director of Alaskans for Better Elections, which advocated for the new elections process, said the changes made by the system are intended to help remove obstacles for people who want to run. In the past, for example, a candidate who wanted to run outside the party structure would have to gather signatures to get on the ballot, he noted.

There are other factors involved in one’s decision to run, he said, such as relocating to Juneau, leaving one’s job or legislative pay.

“Our team didn’t have expectations that we’d see 10 or 12 people in each race,” he said. “And we’ve heard from people who have said, ‘I’m running because of these changes,’ or ‘I can run now because these changes happened.’”