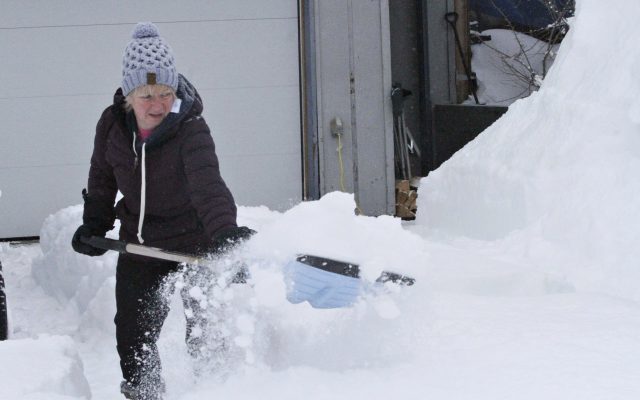 ANCHORAGE, Alaska (AP) — Workers at the end point of the trans-Alaska oil pipeline are using saws to cut up large blocks of hard-packed snow on top of oil storage tanks so they can shove the chunks off the tanks.

More than four feet (1.2 meters) of snow fell in the community of Valdez between mid-February and mid-March, causing the snow buildup that has damaged infrastructure and vented petroleum vapors into the environment, the Anchorage Daily News reported Friday.

The tanks are located at the Valdez Marine Terminal and Alyeska said it has periodically taken some of the 14 tanks out of service. There have been no disruptions to oil shipments, the company said.

As many as 80 contractors wearing respirators to protect them from fumes are working in shifts around the clock to clear the snow off the tanks, Alyeska spokesperson Michelle Egan said. Additional resources are expected.

The contractors are roped to the tops of the tanks and must use handsaws to remove the snow since they can’t use power tools because of the risk of sparks that could set the petroluem products in the tanks on fire.

“That is taking tremendous focus,” Egan said. “We do things very methodically, very safely. It takes as long as it takes.”

The tanks hold the oil until it is loaded onto tankers for shipment. Alyeska is owned by affiliates of North Slope producers ConocoPhillips, Exxon Mobil and Hilcorp. The pipeline moves about 500,000 barrels of crude a day through the 800-mile (1,287-kilometer) pipeline.

Up to four tanks have been taken out of service at various points after the snow pileup sheared off valves installed along the upper edges of the tank roofs. The valves are part of a system used to regulate vapors coming off the oil, and the accumulated snow created enough downward force to knock off 10 valves, Alyeska said.

Workers are installing temporary caps in place of the damaged valves.

Potential penalties or enforcement actions haven’t been decided yet, Moses Coss, an official with the Alaska Department of Environmental Conservation, said.

“We have been in contact with our regulators since the beginning,” Egan said in an email to the Daily News. “We followed our permit and reported emissions appropriately.”

The contractors are wearing respirators because the broken valves are allowing the release of hydrocarbons like benzene, a carcinogenic chemical that is dangerous at high levels of exposure.

The federal Occupational Health and Safety Administration “sets the limit for benzene exposure; our limits are more conservative,” Egan said. “We do not permit workers to work in areas with detectable levels of hydrocarbon without respirators.”

The workers wear traction devices and are roped to the tanks to prevent them from falling.

Four workers have slipped while removing snow, which the company described as “first aid injuries” in a letter to employees. A copy was obtained by the Anchorage newspaper.