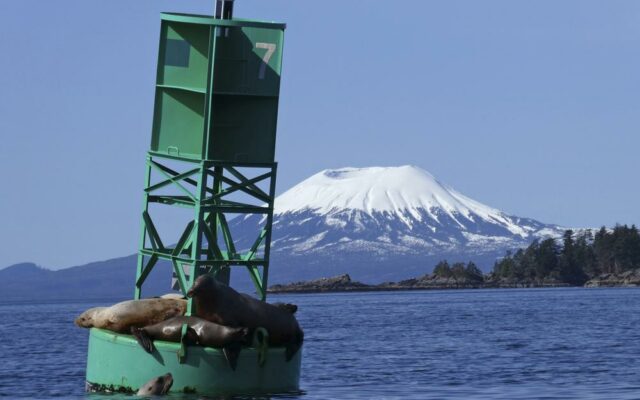 ANCHORAGE, Alaska (AP) — Hundreds of small earthquakes have been reported near a volcano in southeast Alaska believed to have been dormant for at least 800 years.

The cause of the quakes under Mount Edgecumbe, a volcano near Sitka that resembles Mount Fuji in Japan, are not known. However, they may not be an indication of volcanic activity, said Dave Schneider, a research geophysicist with the U.S. Geological Survey at the Alaska Volcano Observatory in Anchorage.

Mount Edgecumbe is a 3,200-foot (976-meter) stratovolcano located on Kruzof Island, about 15 miles (24 kilometers) west of Sitka. The volcano is part of a larger underwater volcanic field of lava domes and craters.

The quakes are somewhat unusual since temblors in the area are usually tectonic, not volcanic, he said.

“These aren’t necessarily related to volcanic activity, they could be a tectonic in nature or a combination of tectonics and the volcano,” he said. “We really can’t tell the difference at this point.”

Right now, there is no need for a huge amount of concern, Schneider said.

“Volcanoes do have swarms of earthquakes that do not lead to eruption,” he said.

The earthquakes, most of which were too small to be observed on multiple seismic stations, continued Wednesday although the frequency has declined.

“I don’t think anybody was even aware that those happened,” said Zach Mayville who answered the phone at House of Liquor in Sitka.

He said there’s been no damage from the quakes.

“We didn’t feel anything,” Mayville said. “We’ve heard nothing from anybody, so we are all good.”

The volcano observatory did a retrospective analysis of earthquake data near Mount Edgecumbe, which showed a small number of earthquakes started occurring in 2020.

There’s been about 40 quakes that were located in the area in the last two years, about one or two a month, far less than what’s been recorded this week.

“You would expect many, many earthquakes to be observed prior to any eruptive activity if it were to occur,” Schneider said. “Earthquake activity is our best indicator of what’s going on there, and that’s something that we’ll be watching closely.”

Alaska has about 90 volcanoes that have been active in the last 10,000 years, he said. Most are remote and not usually near a population center like Sitka, which has about 8,500 residents.

There’s no written record of Mount Edgecumbe erupting, but he said there is Tlingit oral history about small eruptions about 800 years ago.

The last Mount Edgecumbe eruption preserved in the geologic record was about 4,500 years ago.