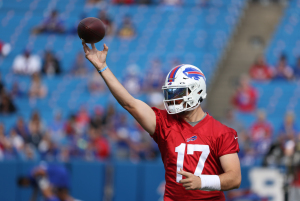 (CBS Local)- The sweet sounds of coaches’ whistles and players trash talking are in the air as NFL training camps officially kicked off this past week across the country. With that begins the preparations for fantasy football owners as well as league commissioners set draft dates and team owners set their draft strategy.

With that in mind, we took a look at the CBSSports.com expert rankings for each position and have compiled top 10 lists for each based on what a player’s average ranking was across the three lists. We start off with quarterbacks and a familiar face at the top of the pack, reigning from his perch in Kansas City.

Not really a surprise given the explosive nature of the offense in Kansas City, but Mahomes once again stands atop the list of quarterbacks for this season. He led the position group in fantasy points per game among those who played a full season with 29.9 (Dak Prescott averaged 30.4 in five games before injury). And, he brings backs largely the same group of weapons aside from Sammy Watkins who signed with the Baltimore Ravens in free agency.

The Chiefs also completely revamped their offensive line, acquiring Orlando Brown Jr. from those Ravens, signing guards Joe Thuney and Kyle Long and drafting center Creed Humphrey. Laurent Duvernay-Tardif also returns after opting out of last season to work on the frontlines as a doctor amidst the COVID pandemic. Mahomes’ protection is likely to be better than each of the past two years which is bad news for the rest of the league. Projected fantasy points (432 total, 25.4 avg)

Fresh off a break out 2020 campaign, Allen moves up to second in the fantasy quarterback rankings. He ranked third among QBs in fantasy points per game last season (29.3 avg) and second in overall fantasy points (468). Offensive coordinator Brian Daboll is back after interviewing for some head coaching openings this offseason, meaning continuity for the offense. The Bills added to Allen’s arsenal by bringing in Emmanuel Sanders in free agency to pair with Stefon Diggs, Cole Beasley and deep threat Gabriel Davis. Allen is actually projected for more fantasy points than Mahomes (457 total 26.9 avg).

While questions may still surround the Ravens passing game, Lamar’s fantasy potential is clear. He’s posted back-to-back 1,000 rushing yard seasons, the first time a quarterback has ever accomplished that feat. He ranked ninth in fantasy points per game (25.6) and is projected to rank fourth among starters this season in standard leagues.

The Ravens also upgraded the receiving corps by bringing in Sammy Watkins and drafting Rashod Bateman in the first round to pair with Marquise Brown and tight end Mark Andrews.

Like Jackson, Murray offers the added threat in the running game, scoring 11 touchdowns on the ground last season to go with 26 touchdown passes. Again, excluding Prescott who missed the last 11 games of the season, Murray was sixth among QBs in fantasy points per game with 26.8. The Cardinals upgraded his protection in the offseason signing veteran tackle Kelvin Beachum and trading for center Rodney Hudson.

They also added to his receiving options too, bringing in A.J. Green and drafting slot play maker Rondale Moore to pair with DeAndre Hopkins and Christian Kirk. Murray is projected to rank sixth among starters in CBSSports.com’s projections averaging 23.4 fantasy points per game. 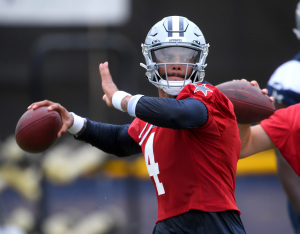 As we’ve alluded to above, Prescott was the top fantasy scoring quarterback through his five starts last season putting up 152 total points (30.4 avg). For perspective, had he continued that pace over the full season, he would have had 486.4 total points which would have left him tops in the league.

How he comes back from the injury remains to be seen but, the Cowboys offense is once again likely to be electric. The trio of Amari Cooper, Michael Gallup and CeeDee Lamb are back and running back Ezekiel Elliott is likely for a bounce back season with Prescott back under center and defenses having to respect the pass more. Prescott is projected to rank eighth among starting quarterbacks with a 22.5 fantasy points per game average.

Wilson was in the next tier of QBs behind Allen in terms of fantasy points per game last season averaging 27.4. He’ll be operating in a new offense this year after Shane Waldron was lured away from Sean McVay’s staff in Los Angeles. The team also addressed the offensive line by adding guard Gabe Jackson in a trade with the Raiders.

The big question is who will emerge alongside Tyler Lockett and DK Metcalf from the receiving corps. Second round pick D’Wayne Eskridge, another potential deep threat, is currently on the physically unable to perform list. Wilson is projected to be 10th among starters in fantasy points per game at 21.9. 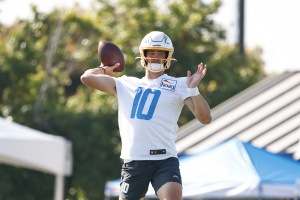 Herbert impressed in his rookie season, taking over for an injured Tyrod Taylor in Week 2 and never looking back, posting the seventh-most fantasy points per game (26.3) and ninth-most total points at 394. You may be sensing a theme here but the Chargers looked to address the offensive line by drafting Rashawn Slater in the first round and signing guards Matt Feiler and Oday Aboushi along with center Corey Linsley.

The organization also added Joshua Palmer to the receiving corps with Keenan Allen and Mike Williams. He did lose tight end Hunter Henry, who signed with the Patriots in free agency, though the team attempted to address that hole by signing veteran Jared Cook. Herbert is actually projected to put up the third-most points among quarterbacks this season at a 24.5 fantasy points per game average.

An interesting tie for eighth here with Brady and Tannehill each averaging out to a ranking of 9 in the experts’ list. For Brady, he put up the seventh-most fantasy points last season (417 total, 26.1 avg) and is projected to finish right in that same spot again this year (389 total, 22.9 avg). All of his receiving weapons are back as the Bucs are largely running it back from last season.

For Tannehill, he sat right behind Brady in fantasy points last season (408 total, 25.5 avg) and is projected to post the ninth-most points this season. The big addition is, of course, receiver Julio Jones, who replaces Corey Davis who signed with the Jets this offseason. There is a new offensive coordinator after Arthur Smith left to take the head coaching job in Atlanta.

Rodgers and Hurts could not be on more opposite ends of the spectrum in terms of NFL track record. Rodgers has been one of the best at the position for 13 seasons now and actually totaled the most fantasy points last season (477) while sitting just behind Mahomes in average (29.8). After a power struggle with the team this offseason, Rodgers has gotten some concessions to return including the return of his old reliable slot target Randall Cobb. The team also added another weapon in rookie receiver Amari Rogers. Rodgers is projected to total the fifth-most points among quarterbacks this season (402).

Hurts, on the other hand, started just four games last season and though he showed flashes, there remains uncertainty about his viability as a long-term starter. However, Hurts’ fantasy value was clear. In his four starts, he averaged 22.9 fantasy points which would have slotted him 12th last season right behind Kirk Cousins. The Eagles upgraded the receiving corps with rookie Devonta Smith (currently sidelined by a sprained MCL) and the offensive line, with the return of Brandon Brooks and Lane Johnson from injury, should be better. Hurts is projected to total 333 points and average 19.6 per game which would rank 14th. But, there’s added value in Hurts ability to create with his legs which is why he slots in right around 10th in the rankings of all three experts.