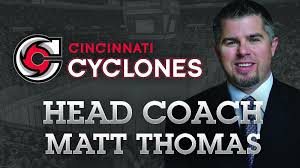 FORMER UAA HOCKEY COACH MATT THOMAS HAS BEEN NAMED THE ECHL COACH OF THE YEAR AFTER GUIDING THE CINCINNATI CYCLONES TO THE BRABHAM CUP TITLE, AN AWARD GIVEN TO THE TEAM WITH THE TOP WINNING PERCENTAGE IN THE LEAGUE. THOMAS WAS VOTED THE ECHL’S TOP BENCH BOSS BY THE OTHER LEAGUE COACHES. THE CYCLONES WERE 51-13 AND 8 THIS SEASON. THOMAS WAS ALSO A COACH IN THE ECHL ALL-STAR GAME THIS SEASON.

FINISHING SECOND IN THE VOTING WAS FORMER ALASKA ACES COACH ROB MURRAY, WHO NOW MANS THE BENCH FOR THE TULSA OILERS.

The ECHL on Tuesday announced that Matt Thomas of the Cincinnati Cyclones is the 2018-19 recipient of the John Brophy Award as the league’s Coach of the Year. The John Brophy Award is the trophy presented annually to the ECHL coach selected to have contributed the most to his team’s success as selected in a vote of league coaches. The trophy is named for John Brophy, who won a record three ECHL titles with Hampton Roads in 1991, 1992 and 1998, and was inducted into the ECHL Hall of Fame in 2009. Rob Murray of Tulsa finished second in the voting, followed by Florida’ Brad Ralph, Neil Graham of Idaho and Newfoundland’s John Snowden.