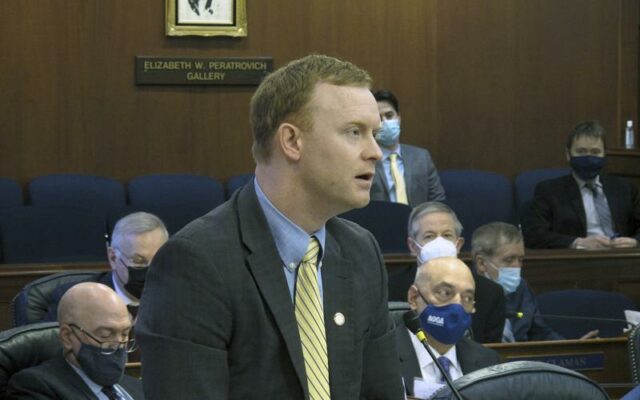 JUNEAU, Alaska (AP) — The Alaska House tabled action Monday on a proposal to remove from legislative committees a state representative who has said he joined the Oath Keepers far-right organization years ago.

The meeting was not widely publicized beforehand, and Eastman expressed concern with the lack of transparency around the decision.

The matter was tabled on the House floor following an objection from Eastman, who said a vote affecting his role as an alternate on a legislative ethics committee needed to be handled separately.

Eastman last week told The Associated Press he joined the Oath Keepers “a little over 12 years ago. Along with 38,000 others who have committed to honoring the oaths we have taken.”

A leader of the Oath Keepers and other members or associates have been charged with seditious conspiracy related to the insurrection at the U.S. Capitol on Jan. 6, 2021. Eastman has said that he does not condone the storming of the Capitol.

House Speaker Louise Stutes, speaking with reporters about Monday’s floor session, said there were issues that needed to be addressed, including the point raised by Eastman. “We want to give the minority an opportunity to address the situation from within as well,” she said. Eastman is part of an 18-member Republican minority.

House Minority Leader Cathy Tilton said the minority was ready to advance to a vote Monday. She said her members were free to vote as they choose.

Tilton, who with a fellow minority member voted no on the committee report, said it’s a “slippery slope” for the Legislature to make determinations about a person’s involvement in an organization. She noted there have been no charges against Eastman.

Stutes said she expected another committee on committees meeting as early as Tuesday.