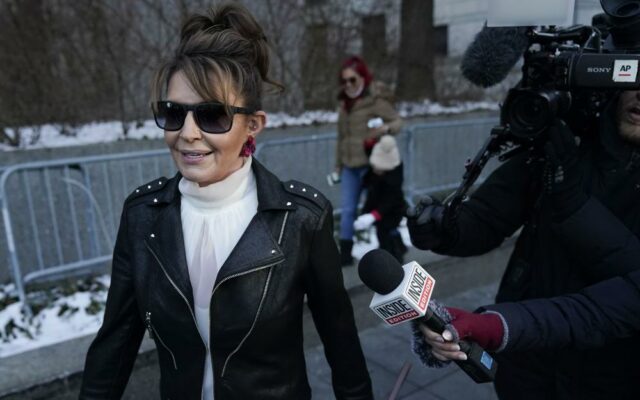 U.S. District Judge Jed Rakoff made the ruling with a jury still deliberating at a New York City trial where the former Alaska governor and vice-presidential candidate testified last week.

The judge said Palin had failed to show that The Times had acted out of malice, something required in libel lawsuits involving public figures.

“This is the kind of case that inevitably goes up on appeal,” Rakoff said in an explanation from the bench.

Lawyers for both Palin and The Times declined to immediately comment on the judge’s decision.

Palin sued The Times in 2017, claiming the newspaper had damaged her career as a political commentator and consultant with the editorial about gun control published after U.S. Rep. Steve Scalise, a Louisiana Republican, was wounded when a man with a history of anti-GOP activity opened fire on a Congressional baseball team practice in Washington.

In the editorial, The Times wrote that before the 2011 mass shooting in Arizona that severely wounded former U.S. Rep. Gabby Giffords and killed six others, Palin’s political action committee had contributed to an atmosphere of violence by circulating a map of electoral districts that put Giffords and 19 other Democrats under stylized crosshairs.

The Times acknowledged that then-editorial page editor James Bennet had inserted wording that wrongly described both the map, and any link to the shooting. But the newspaper’s lawyers said he made an “honest mistake” that was never intended to harm Palin.

To prove malice, Palin’s lawyers had to show that Bennet knew the wording was false or he knew that there was “a high probability” that it was false, the judge said.

Despite his ruling, Rakoff said he was “hardly surprised Ms. Palin brought a lawsuit. … I think this is an example of very unfortunate editorializing on the part of The Times.”