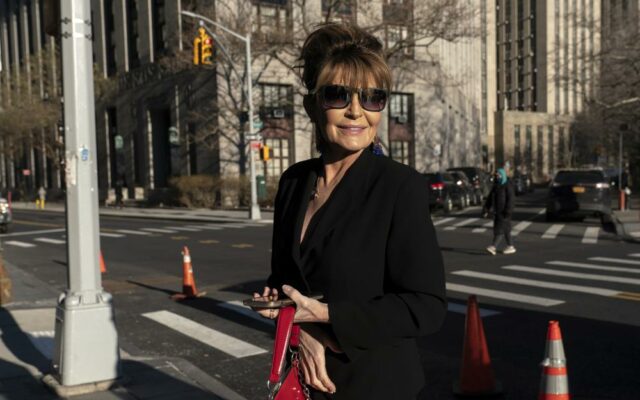 A Times lawyer conceded the newspaper had made a mistake, but argued there was no evidence it had set out to damage Palin’s reputation.

At the time of the 2017 editorial, Palin was far removed from her fleeting fame as the Republican vice-presidential nominee, trying to live a quiet life in her home state, plaintiff attorney Kenneth Turkel told a jury in federal court in Manhattan. The piece drew her into an unfair fight, Turkel said.

“What this dispute is about in its simplest form is power, and lack of power,” he said. He also called it an example of how The Times “treated people on the right they don’t agree with. … They don’t care. She’s just one of ‘them.’”

The Times ran a correction but never apologized to Palin, which was “indicative of an arrogance and sense of power that’s uncontrolled,” he added.

He added: “Sarah Palin has done nothing to deserve this. … All they had to do was dislike her a little less and we’re not sitting here today.”

In his closing argument, Times lawyer David Axelrod called the case “incredibly important because it’s about freedom of the press.”

To prevail in the suit, the plaintiff “needs to show that it wasn’t just an honest mistake” but “that they printed something that they knew was false,” he said. The evidence showed “Gov. Palin can’t come close to meeting that burden,” he added.

He also pointed out that the Palin lawsuit makes no claim that she lost income because of the editorial. “She doesn’t do that because it didn’t happen.”

The jury — which began deliberating late in the day after receiving the judge’s instructions on the law — will have to decide whether The Times acted with “actual malice” against a public figure, meaning a Times editorial page editor knew what he wrote was false, or with “reckless disregard” for the truth when he inserted the disputed wording into the piece. If the nine jurors find there was libel, they can set monetary damages.

Palin sued the Times for unspecified damages in 2017, about a decade after she burst onto the national stage as the Republican vice-presidential nominee. She alleged the newspaper had damaged her career as a political commentator and consultant with the editorial about gun control published after U.S. Rep. Steve Scalise, a Louisiana Republican, was wounded when a man with a history of anti-GOP activity opened fire on a Congressional baseball team practice in Washington.

In the editorial, the Times wrote that before the 2011 mass shooting in Arizona that severely wounded former U.S. Rep. Gabby Giffords and killed six others, Palin’s political action committee had contributed to an atmosphere of violence by circulating a map of electoral districts that put Giffords and 19 other Democrats under stylized crosshairs.