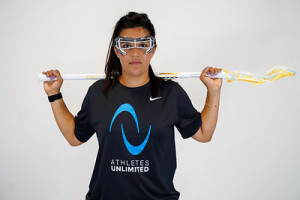 (CBS Local)– This weekend is a big one for women athletes around the world. Thousands of women will be competing in the 2020 Tokyo Olympics and in the Metro DC area, a new professional women’s lacrosse league called Athlete Unlimited Lacrosse debuts on CBS Sports Network.

Athletes Unlimited Lacrosse is the third league to be created under the Athletes Unlimited banner from co-founders Jon Patricof and Jonathan Soros. Athletes Unlimited Softball made its debut in 2020 and Athletes Unlimited Volleyball was played earlier this year in Texas. The new league puts a twist on traditional lacrosse with new rules, a smaller field and the opportunity for players to earn money for personal causes. Former University of North Carolina player Amber McKenzie is one of the women playing in the five week league and CBS Local’s DJ Sixsmith chatted with her about the new league, her journey in lacrosse and being a mom.

“I had said that I was going to hang up my cleats after 2020, but then the pandemic happened,” said McKenzie. “I was approached with this opportunity after our season was cancelled in the old league and they told me about the non-traditional way of the sports. They told me about how the players would be ranked and how the teams would change every week. This opportunity with Athletes Unlimited as definitely something I wanted to be a part of. After I heard about the way the league was structured and the support they have for moms, I knew I wanted to be a part of it.”

“I have been a member of the player executive committee, which helps decide on some rules and truthfully lots of different things in the league,” said McKenzie. “I have been a part of that for the past six or eight months and I’m so happy to be on-site and have all the women playing. Both Jon Patricof and Jonathan Soros are athlete driven. Even after our first scrimmage, we met about a bunch of rules and the way the game was structured and the number of the players on the field and they were open to all of our ideas.”

The defender is a two-time world champion and was named to the All-World team in 2009 and 2013. In fact, McKenzie was named Defender of the World in 2009 and she is excited for what type of impact this fast-paced, high scoring league can have on the next generation of young lacrosse players.

“There are eight minute quarters and the games are going to go by really fast, but they are going to be really fun to watch,” said McKenzie. “I’m grateful for my husband because he has been so supportive of this journey. Athletes Unlimited has a great policy for moms, so I am given a stipend every week to have childcare while I’m performing. My kids get to see all of these amazing women putting so much passion into their sport and I’m super excited for them to be a part of this as well. I want this league to be there for the future of lacrosse.

“I’m a full-time mom and we have women working full-time jobs while they’re here,” said McKenzie. “We have a stock trader and women are here performing at the top of their game. We hope this can be their income and that this can be the way they provide for themselves and families. It has to start somewhere and that’s why we are so grateful for Athletes Unlimited so that there is a future there. We are impacting the game of lacrosse and many other things with athlete causes and each player gets to play for their own cause and non-profit.”