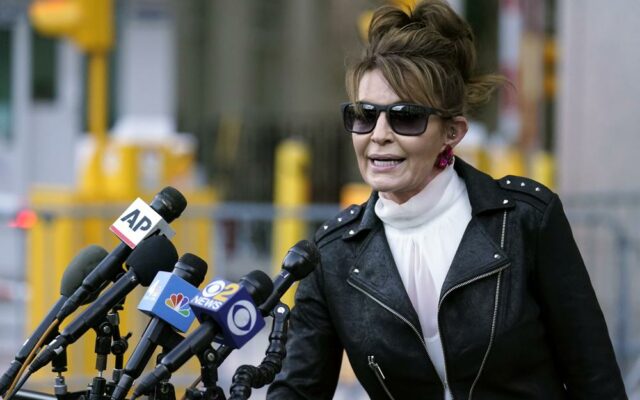 In the nearly 14 years since she burst onto the national political scene, the former Alaska governor has appeared on reality television programs, written books, spent time as a Fox News contributor, formed a political action committee in her name and been a rumored White House contender. She more recently revived her status as a conservative sensation with an ultimately unsuccessful lawsuit against The New York Times.

Now, the first Republican female vice presidential nominee is vying for what could be considered a less glamorous role: a member of the U.S. House.

Palin is among 48 candidates running for Alaska’s lone House seat following the death last month of Republican Rep. Don Young, who held the job for 49 years. If successful, Palin would be one of 435 members in a chamber where ambition runs deep but legislating is tough, in no small part because of the populist politics that took hold in the aftermath of the 2008 election.

Given those dynamics, it would be easy to dismiss Palin’s candidacy as the latest headline-grabbing twist in an unconventional career. Some of her critics have sought to cast her as an opportunist seeking to bolster her brand. The opinion section of the website of Alaska’s largest newspaper is dotted with letters to the editor urging Alaskans to reject her run. Some remind readers she left the last major job she had in politics, as Alaska’s governor, with about 16 months left in her term.

But in a recent interview with The Associated Press, Palin, 58, dismissed such critiques. She insisted her commitment to Alaska has not wavered and those who suggest otherwise “don’t know me.” She said she is serious about seeking the House seat and doesn’t need a “launching pad for anything else.”

In fact, she said, her unique place in American politics would put her in a stronger position in Washington. Unlike other freshmen lawmakers, she said, she could “pick up the phone and call any reporter and be on any show if I wanted to, and it would be all about Alaska.”

“I love to work, and anyone who is around me, they know,” she said. “What I’m doing is applying for a job, for Alaskans, saying: ‘Hey, you guys would be my boss. Do you want to hire me? Because if you do, I’ll do a good job for you, and I won’t back down.’”

There’s only one former governor who is currently a member of the House — Democrat Charlie Crist of Florida. Palin faces several hurdles to get there.

One is navigating elections that will unfold in rapid order. A June 11 special primary will be the first statewide by-mail election. The four candidates who get the most votes will advance to an Aug. 16 special election, in which ranked-choice voting will be used. The winner will serve the remainder of Young’s term, which expires in January.

There also will be an August primary and November general election to determine who will serve a two-year term starting in January. Palin is one of 16 candidates so far to have filed for the regular primary.

Some voters question Palin’s decision to leave the governor’s office, a move she has attributed to an onslaught of records requests and ethics complaints she said were frivolous and had become distractions.

She has spent time out of the state but maintains a home in Wasilla, her hometown and where she got her start in politics.

“Well, I’m sorry if that narrative is out there because it’s inaccurate,” she said of the perception she had left Alaska behind. She said Alaska is her home and that she was “shoveling moose poop” in her father’s yard on a recent sunny day before calling a reporter.

She has regularly voted in state elections since leaving office, according to the Division of Elections.

“I’m still all about Carhartts and steel-toed boots and just hard work,” Palin said, referring to a popular brand of outerwear. “I just have been blessed with opportunities and a platform to get out there and tell and show other people the beauty of being an Alaskan.”

She mentions Alaskans’ hunting lifestyles and the importance of responsibly developing the state’s oil and gas resources. She said she plans to attend events, including this week’s state Republican Party convention.

The contest in Republican-leaning Alaska will do little to change the balance of power in Washington. But the election is being closely watched as a barometer of former President Donald Trump’s connection to the GOP’s most loyal voters.

In Wasilla, Trump 2020 or Trump 2024 banners fly from several homes, the few political signs seen so far this election year. Palin said if Trump runs for president in 2024 and asks her to be his running mate, she’d consider it, though she said he could choose anyone and they haven’t had such a candid conversation.

Palin said Trump was among those who contacted her after Young’s death asking if she would be willing to run. She said this is a good time in her life to seek a return to office, politically and personally. Her family life has changed, she noted, with her four older children grown. Her youngest, Trig, is in middle school. Palin was divorced from Todd Palin, her husband of more than 30 years, in 2020.

Palin said she feels like she has “nothing to lose” in running. After having her political and personal life in the media glare for so long, “what more can they say?” she said, adding later: “To me, it’s freedom.”

Trump has endorsed Palin and has made the state’s senior U.S. senator, Lisa Murkowski, one of his top targets this year after she criticized him and voted to convict him during his second impeachment trial.

Even if Palin doesn’t win the election, she could emerge as a high-wattage critic of Murkowski, who faces voters later this year. Palin said she disagrees with Murkowski on some of her positions, including her vote to convict Trump during his second impeachment trial. But on issues like resource development in Alaska, Palin said she believed they would be “on the same sheet of music.”

Palin has perhaps the highest profile among a list of candidates that includes current and former state legislators, a North Pole city council member whose legal name is Santa Claus, and Republican Nick Begich, who got into the race last fall and has been working for months to rack up conservative support.

Begich said he considers the Matanuska-Susitna region, a conservative hotbed that includes Wasilla, as one of his strongest areas. He said he is unaware of any of his supporters defecting since Palin joined the race.

“Everyone that has come to support me remains fully supportive, and that’s a strong statement because a lot has changed,” he said.

Tim Burney, who lives in Wasilla, said he supports Palin. He said she resigned “for the good of the state” after her detractors “came at her with guns ablazing.”

“She just lives right down the road here, and, you know, she grew up here,” he said while smoking a cigarette outside the Mug-Shot Saloon after finishing lunch on a recent day.

“Her heart’s here in Alaska, and I think that she’s good for Alaska,” he said.

Joe Miller, a former Republican and now Libertarian whom Palin endorsed in two of his unsuccessful Senate races, said Palin would be no ordinary House freshman and would have an “extraordinary” platform she could use to help Alaska. He said she’s the “only anti-establishment, truly conservative” candidate in the race and that she could be the “natural repository” for voter angst over economic and other issues.

Holly Houghton, who works as a pharmacy tech, is willing to hear Palin out. Houghton, who was eating a take-out lunch with her son outside a restaurant in Wasilla recently, said she has mixed feelings about Palin and is also considering Begich.

Houghton said she doesn’t like how Palin has carried herself in her personal life but also thought she was an “excellent” governor.

Houghton said she thinks of the Begich family as Democrats and wants to look more closely at Begich. Begich’s grandfather, Democrat Nick Begich, held the House seat before Young. His uncle Mark was a Democratic U.S. senator and his uncle Tom is the state Senate’s Democratic leader.

Jesse Sumner, a member of the Matanuska-Susitna Borough Assembly, said he thinks Begich is a good candidate. Sumner filed to run for the House seat as a joke at the filing deadline, on April Fool’s Day. He later withdrew.

He said he doesn’t see Palin around town much and that Palin’s run seems to be “more like it’s about the Sarah Palin show than about Alaska.”