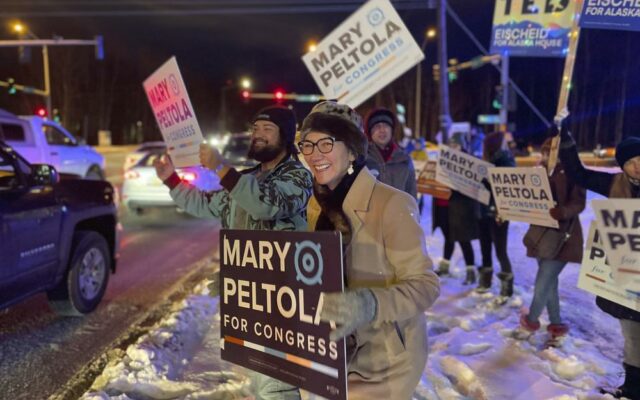 Peltola embraced the legacy of her Republican predecessor, the late Rep. Don Young, as she sought a two-year term in a race that also included Libertarian Chris Bye.

Under ranked voting, ballots are counted in rounds. A candidate can win outright with more than 50% of the vote in the first round. If no one hits that threshold, the candidate with the fewest votes is eliminated. Voters who chose that candidate as their top pick have their votes count for their next choice.

Rounds continue until two candidates remain, and whoever has the most votes wins. Tabulations rounds would take place Nov. 23.

Peltola won an August ranked vote special election against Palin and Begich to serve out Young’s term, which ends in January. Young, who had held the House seat for 49 years, died in March.

Peltola, in an ad, referred to the seat as “Don Young’s seat in Congress.” She also had said the race was about “carrying on” Young’s legacy, which she said was about putting Alaska first.

Palin, the 2008 Republican vice-presidential nominee, was seeking a political comeback 13 years after she resigned as Alaska’s governor. She brought back her “drill, baby, drill” mantra and said she could use her prominent profile for the benefit of Alaska. Her bid was also endorsed by former President Donald Trump.

While she and Peltola are friendly – Peltola’s time as a state lawmaker overlapped with Palin’s as governor – Palin has railed against the state’s ranked choice voting system and said Alaskans “do not want the destructive democrat (sic) agenda to rule our land and our lives.”

Both she and Begich ahead of the general election had urged voters to “rank the red,” or the Republicans, though Palin told reporters in Anchorage Tuesday that she had to “swallow my pride” in doing so. She also said it went against what she “preached” previously, which was “rage against the machine.”

“We have to ask others to support the other Republicans, even though it kind of goes against any competitive bone anybody would have in their body,” she said. Palin said she ranked Begich second on her ballot.

Begich, who earlier in the campaign cast Palin as a quitter and someone chasing celebrity, said a Republican in the seat is better than a Democrat. But in a recent interview, he argued he was the Republican with the momentum, saying he had seen a growth in his support since his third place finish in the special election.

Begich in one ad refers to himself as an “inflation fighter.” He said one way he could do that is by fighting against excess government spending. He said he was interested, if elected, in focusing on economic issues and making the case for Alaska resource development.

Peltola, who is Yup’ik, became the first Alaska Native to serve in Congress and the first woman to hold Alaska’s seat. One of her campaign mantras has been “fish, family and freedom.” She expressed concerns with diminished salmon runs — salmon is a staple in Alaska — and food insecurity. She also emphasized her support of abortion rights.

One of her first acts in the House was to reintroduce a number of bills that Young had supported.

Peltola has family connections to Young, and she hired his former chief of staff to fill the same role in her House office. Young’s daughters both endorsed Peltol a.

She described herself early Tuesday as optimistic and happy. Peltola said the best part of the campaign has been “the feedback, the positive energy.”