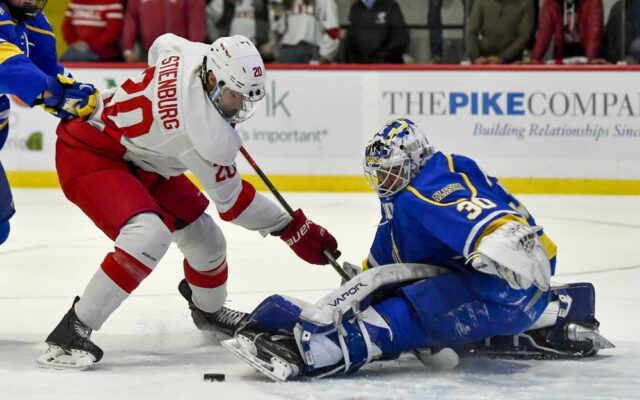 Playing college hockey in the nation’s northernmost state comes with an education in patience, positive attitudes — and efficient packing.

The Alaska Nanooks are all about making the most of what they have.

“We’re allowed a duffel bag, a hockey bag and a backpack. I usually stuff like an extra 20 pounds in my hockey bag,” said freshman forward Brady Risk, the team’s leading scorer.

The last round of conference realignment left them without a league home, so the Nanooks are playing as an independent. This, of course, is so much better than not playing at all, a deprivation they endured last season due to the pandemic.

Intrastate rival Alaska Anchorage is on hiatus for a second straight year, a university budget-cut casualty before private fundraising restored that program for 2022-23. The Alaska state budget, closely tied to oil prices, took such a hit in the last decade that all varsity sports at the Anchorage and Fairbanks campuses were at one point in danger of being dropped.

“We’re not at that point where we’re looking at it and saying, ‘Hey, we’ve got to get in the national tournament,’” Nanooks coach Erik Largen said. “We’re just at the point of growing and getting better as a program, and the guys have embraced it. They just want to play.”

The Nanooks wrapped up a 22-night road trip on Jan. 15. They left campus in Fairbanks on Christmas night, when a simple stop in Seattle became a four-day stay as virus-related airline staff shortages and wintry weather in the region grounded flight after flight.

After a red-eye and a single practice, Alaska lost the opener at fifth-ranked Denver before tying the second game of the series. The Nanooks then split a pair of games at Maine and did the same at 10th-ranked Minnesota. They are 6-15-1 with a roster that’s almost two-thirds freshmen, with 20 scheduled games against teams currently ranked in the top 25.

“When I grew up in Canada, I didn’t know where some of these places were on a map. Being in Alaska, it gets tough up there in the winter, so it’s nice to get out to some of these cool places,” said Risk, who’s from Medicine Hat, Alberta.

The pandemic-driven evolution of online learning has actually been a benefit, making it easier to be on the road so much and still keep up with schoolwork. Only 14 of the 34 scheduled games this season are at home in Fairbanks, where on the winter solstice there was 3 hours and 42 minutes of daylight and the average January high is 2 degrees fahrenheit (minus-17 celsius) .

Support for hockey runs strong here, even if the vitamin D does not.

“We’re all deficient,” said Barrie Greenfield, vice president of the Face-Off Club, a booster organization for the Nanooks.

When Risk and some teammates drove for COVID-19 testing before playing RPI on Dec. 15, the air temperature had risen — yes, risen — to 35 degrees below zero around sunset. Their van window broke, so they had to leave it open in the arena parking lot.

The 35-year-old Largen is a native of Fairbanks and an alumnus of the program who was the youngest NCAA Division I head coach at the time of his hire four years ago.

There could hardly be a better fit to guide the Nanooks through this stage than Largen, a perpetually upbeat former goaltender whose coaching journey through the junior ranks included two years with the North American Hockey League’s Fairbanks Ice Dogs.

“Erik’s done a really good job of being innovative,” athletic director Brock Anundson said. “He’s coached in different areas and seen how things work, and I think he’s really good at packaging deals for teams that make the most out of every cent that he spends.”

UAF’s game contracts often include subsidies to offset opponent travel costs, because the distance can make it difficult to schedule home games.

As Largen sat on a bench outside the locker room in Mariucci Arena the day before the first game of the series, Minnesota assistant coach Garrett Raboin walked by with a greeting and a question about how the team was spending the remainder of the afternoon.

Raboin then pivoted to the future: “Do you have openings the next few years?”

Largen: “Yeah. Get us on the schedule!”

Fairbanks has a population of 32,000 — “big enough where you don’t know everybody,” Greenfield said, “but small enough where you run into people at the store” — and Largen knows that feeling well.

“Everyone thinks that they’re a part of it. Everyone wants to give you their two cents on the power play,” the coach said.

Nanooks players have long been well-connected with the local youth programs, carrying role model status around town. As for alumni like Jordan Hendry, who won a Stanley Cup in 2010 with the Chicago Blackhawks and settled in Fairbanks, or Colton Parayko, who’s playing for the St. Louis Blues, they are next-level celebrities.

Six Canadian provinces and four U.S. states are represented on the current Nanooks roster, as are natives of Finland, Hungary, Latvia, Russia and Sweden. Seeing the world is part of the sales pitch to potential opponents, too, as well as to prospective conferences.

The only other independents this season are Arizona State and Long Island. Augustana will open a $40 million arena in Sioux Falls, South Dakota, and enter Division I for 2023-24. Robert Morris in Pittsburgh will join them, having reinstated its program. That will give the sport 63 teams, an all-time high, offering a few more options for opponents for the Nanooks.

“They’ve been smart about building their schedule. What becomes important is coaches that are in conferences be willing to make a trip to Alaska every so often,” Lucia said. “I know it’s not an easy trip, but at the same time how many kids have a chance to go to Alaska? By going up there once every four years, I don’t think that’s too much to ask as we continue to want to grow our game.”