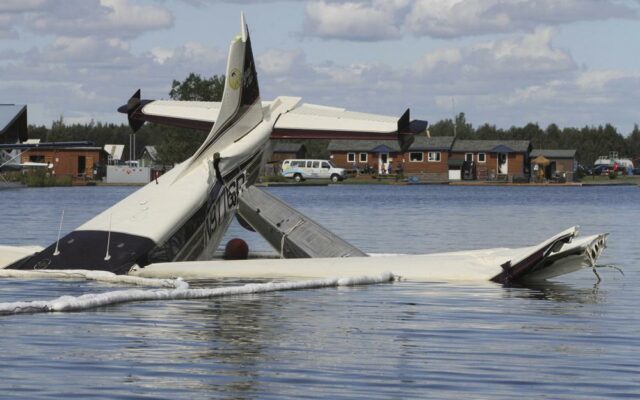 ANCHORAGE, Alaska (AP) — A plane with seven people aboard bound for Katmai National Park and Preserve in Alaska crashed into the water Tuesday as it was leaving a seaplane base in Anchorage, with two people suffering serious injuries, authorities said.

Clint Johnson, chief of the National Transportation Safety Board’s Alaska division, said the information he initially received was that there were six people on board. He said he was later told there were seven on board.

Aaron Danielson, chief of the Ted Stevens International Airport Police and Fire, said there was some “initial confusion on scene.” A statement from the department late Tuesday afternoon said all seven were taken to area hospitals for evaluation and treatment.

Johnson said the plane operated by Regal Air had taken off and was in its initial climb phase when the accident occurred.

The airport police and fire department said the plane was conducting a water takeoff “when, according to the pilot, a strong crosswind caused the right wing to rise after the plane was airborne. While the pilot attempted to make corrections,” the plane crashed.

Johnson said investigators are still gathering information. There have been strong winds in the Anchorage area recently but “we don’t know if that played a part in it or not.”

Johnson said the aircraft following the accident was “substantially damaged and partially submerged.” He said recovery crews were in the process of trying to remove the wreckage from the water.

He said the passengers were from outside Alaska.

“It was pretty painful to see,” witness Lisa Emmerson of Anchorage told reporters at the scene.

She was walking when she saw the crash but said first responders and others arrived quickly. When responders pulled the people out of the plane, three of those who were on board were covered in blood, she said.

“And they had one guy sitting right here, and I know he kept saying, ‘My eye, my eye,’” Emmerson said. “When they brought one girl out of the water, she was white as a ghost.”

She said she saw the plane struggling in the windy conditions just before the crash and saw waves on Lake Hood.

“I could tell that he was crashing, and then … the water just splashed,” Emmerson said. “I was just shaking.”

A message seeking comment was sent to Regal Air, which offers a bear viewing package at the park among its flight options.