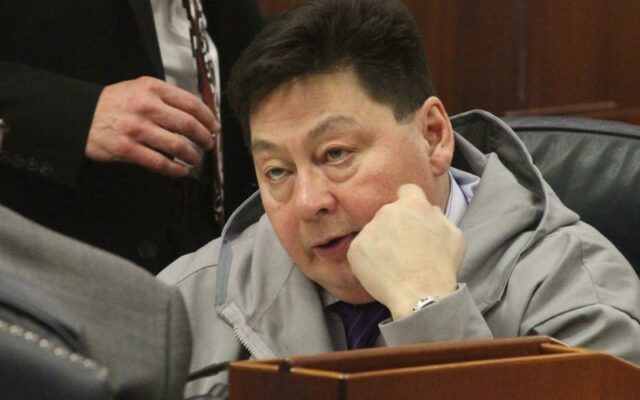 JUNEAU, Alaska (AP) — The son of a former Alaska lawmaker faces charges of manslaughter and evidence tampering in the death of his father, former state Rep. Dean Westlake, according to charging documents.

Tallon Westlake was arrested over the weekend. An online court records system did not show an attorney Monday morning who could speak on his behalf. The charging documents are dated Sunday.

Tallon Westlake called the Anchorage Police Department’s communications center Saturday morning, saying an ambulance was needed. He indicated “that he did not know what was going on with his dad and his dad was not awake,” the document states.

According to the documents, police found blood on Dean Westlake’s hands and feet, and his face was bruised and bloodied. They also saw blood streaks on hallway walls and “blood spatter.” A neighbor said she got home around 2 a.m. or 2:30 a.m. Saturday and heard a loud argument from Tallon Westlake’s apartment, though said she thought it was a man and woman arguing.

Police described a “heavy bleach smell” in the apartment and wet floors that appeared to have been recently mopped, the documents say.

Dean Westlake’s girlfriend said she spoke with her boyfriend the prior evening and that he “seemed fine,” according to the documents. She said Tallon Westlake “had been doing badly since the death of his mother about a year prior,” the documents state.

An autopsy was planned.

Dean Westlake, who was elected to the state House in 2016, announced in late 2017 that he was resigning after several women accused him of inappropriate behavior. He said he was sorry if any of his words or actions made anyone uncomfortable.