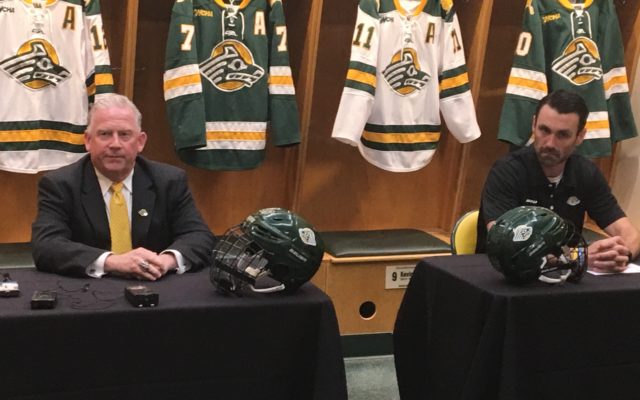 ANCHORAGE, Alaska — The University of Alaska Anchorage (UAA) announced today that in fall 2019 a new chapter begins for Seawolf hockey. As the UAA sport enters its 40th year, the university plans to return play to campus with home games at the Wells Fargo Sports Complex.

The decision comes as increasing financial constraints due to state budget cuts require the university to evaluate its venue needs. For decades, the Sullivan Arena has been home to Seawolf hockey games.

“We believe the future of Seawolf hockey is bright,” said Greg Myford, UAA director of athletics. “We are working hand in hand with the Municipality of Anchorage and Sullivan Arena management to create a smooth transition. Our intent is to play in our on-campus sports complex starting in the fall, while we finalize plans to expand that facility over the next few years.”

Myford emphasized UAA’s firm commitment to Seawolf hockey and to ensuring the university provides the team, students, alumni and fans with a memorable UAA experience each time they attend a Seawolf game.

Myford said the campus sports complex will provide an exciting game-day atmosphere for UAA’s D1 hockey now and in the future. The complex is currently the home of Seawolf hockey for all aspects except home games. The team practices there. Coaches’ offices, sports medicine facilities and the team’s locker room and equipment are all located there.

“The Sullivan is home to many wonderful memories for hundreds of our former players and thousands of Seawolf hockey fans who attended games there over the years,” Myford said. “We remain grateful to the Municipality of Anchorage for more than 30 years of home ice partnership.”

NEW ORLEANS – Caroline Kurgat of the University of Alaska Anchorage was name the United States Track and Field and Cross Country Coaches Association Female Athlete of the Year Wednesday.

Kurgat, a senior from Eldoret, Kenya, was an easy choice for National Athlete of the Year after she spent the 2019 outdoor season rewriting the record books.

Just this past weekend at the NCAA Div. II Outdoor Championships, she became just the third woman in NCAA Div. II history to complete the distance double in back-to-back years as she won individual titles in the 5,000 and 10,000.

That enough would have been impressive, but Kurgat isn’t your typical athlete.