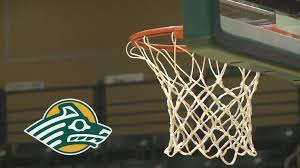 Sophomore guard Tobin Karlberg of Anchorage scored a career-high 23 points and senior guard Tyrus Hosley scored all 15 of his points in the second half last night to help the UAA men to a 94-81 victory over Fairbanks at the Patty Center.
The Seawolves now 17-11 overall, 10-7 in the GNAC, also got 19 points from senior guard Jack Macdonald. UAA remains in the hunt for one of six GNAC playoff spots.
The Nanooks were led by 25 points and 12 assists from guard Shadeed Shabazz.

UAA will play its final home game of the season Saturday as they host Montana State Billings at 5:15 p.m.

THE CCHA LIVES AGAIN! THE SEVEN SCHOOLS THAT ARE LEAVING THE WCHA AFTER NEXT SEASON, LEAVING UAA, UAF AND HUNTSVILLE BEHIND, ANNOUNCED TUESDAY THAT THEY’LL REGROUP UNDER THE OLD CENTRAL COLLEGIATE HOCKEY ASSOCIATION MONIKER. THE BRAND HAD BEEN DORMANT SINCE 2013 WHEN COLLEGE HOCKEY REALIGNED AND THE WCHA ABSORBED SEVERAL OLD CCHA SCHOOLS.