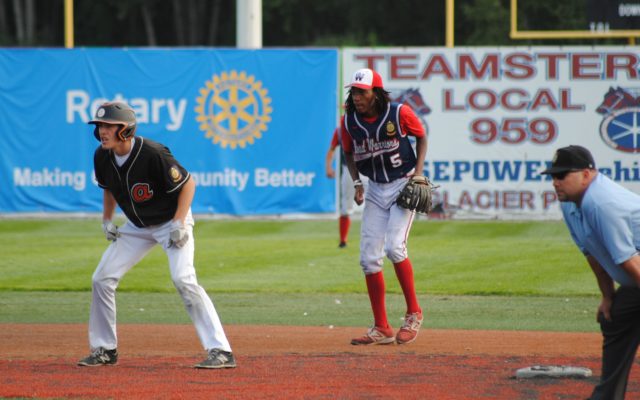 Read all about it here, courtesy of Van at the Alliance…

In a stunning reversal of fortune, the West Eagles scored three runs with two outs in the bottom of the seventh inning capped by Jack Opinsky’s two-run single that provided a 3-2 walk-off victory over Wasilla in the championship game of the Alliance State Tournament at Mulcahy Stadium.

Down to their final out – but no longer facing Wasilla ace and tournament MVP Jacob Gilbert, who had reached his pitch limit – the Eagles beat up the bullpen after Eli Seaver was hit by a pitch, Carter Stolp drove in one run with a single and Opinsky won it with a frozen rope to left field that deflected off the outfielder’s glove.

Opinsky, the tournament’s Gold Glove Award winner and the head coach’s son, was 0-for-3 before delivering the biggest base hit of his life to give West its first state title since 1977.

The Eagles (17-12) had more hits in the seventh inning than they mustered in the first six innings against Gilbert, a rocket right-hander who carried a tournament-best 13-inning scoreless streak into the final inning.

West catcher Luke Langnes got the party started with a leadoff double off Gilbert. With one out, Max Fink reached on an infield error to put runners at first and third. Gilbert struck out the next batter (his 12th of the night) and was removed from the game after reaching the 105-pitch max.

Everything changed when Gilbert left the mound. Three batters after he was gone, so was Wasilla’s lead.

Gilbert was amazing the whole tournament, especially on the mound and the base paths, and took home the MVP award. It’s rare that the MVP comes from the losing team but that should tell you how great Gilbert was at state.

He didn’t give up an earned run in 13.1 innings and struck out 25 batters over two starts. He led the tournament with six stolen bases and led his team with six runs. His defense in center field was undeniable. He played with passion and poise.

The smooth southpaw racked up 10 strikeouts in five innings before he was pulled because of the 105-pitch limit. In two starts, he went 1-0 with 26 strikeouts in 12 innings and a 0.75 ERA. He won the Top Pitcher Award.

Nothing came easy for Wilson in the title game. He was forced to battled every inning, which pushed up his pitch count slow and steady.

There was an expectation for 6-foot-4 lefty to throw well and the 2020 Gatorade Alaska Player of the Year who is headed to NCAA D1 Texas Tech University did just that in the biggest start of his career.

He didn’t get the win, but he gave his team a chance to win.

This was the second time he saved the Eagles in this tournament. On Day 4, he earned a six-out save to close the door on a 7-4 win over top-seeded Dimond.

Wasilla was making its second consecutive appearance in the state championship game and this was the second time the Road Warriors had their hearts ripped out. Last year they lost 13-8 to Juneau in extra innings. This time it was a walk off.

This loss was the first defeat in five tournament games for the Road Warriors, who were gunning for Wasilla’s first state title since 1990.

Wasilla slugger Nolan Murphy earned the tournament’s Big Stick Award after batting .533 after going 8-for-15 and leading the tournament in hits and his team with five RBIs.

The Mulcahy Stadium parking lot was packed as a sellout crowd of 499 was on hand to watch the final game of the Alliance Baseball League season. The crowd size was limited because of the City-approved mitigation plan due to COVID.

So that meant people were forced to watch from wherever they could, peeking through open fences and even climbing atop vehicles to watch over the outfield wall. That’s normally a no-no, but maybe that’s the new normal.

It was a game nobody wanted to miss.

Even Alaska Gov. Mike Dunleavy was at the game and threw out a ceremonial first pitch.