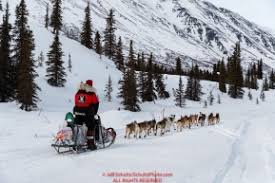 From the Iditarod news release:

GCI technician Bob James presented Zirkle with the Dorothy G. Page Halfway Award. By arriving first to Iditarod, Zirkle has a choice of either a new iPhone XS 64GB in gold that includes one year of service or $3,000 in gold nuggets.

For 25 years, GCI has sponsored this award, which honors the late “Mother of the Iditarod,” Dorothy G. Page. The trophy, which is made of Alaska birch and marble and features a photo of Page, remains year-round at Iditarod headquarters.

This award will be re-presented in Nome at the Iditarod awards banquet on Sunday, March 17, at the Nome Recreation Center.